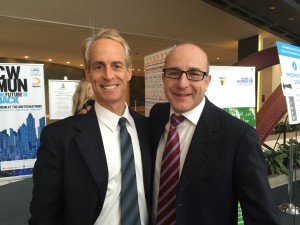 At the United Nation’s International Day of Happiness on March 20th, 2016, I had the pleasure of meeting hypnotist, Paul McKenna, just before he demonstrated his Havening technique that helped a patient move from upset and depression to a calm blissful state in minutes using this great modern psychology breakthrough. Paul McKenna is considered by many to be the number one hypnotherapist in the world. He is renowned for helping people treat the most difficult problems. The Times of London recognized him as one of “the world’s most important modern self help gurus.” Paul McKenna is the most successful non-fiction author in Great Britain. His I Can Make You THIN is the best-selling self-help book in the United Kingdom’s history and some of his other successful books include Quit Smoking Today Without Gaining Weight, and morerecently, I Can Make You Happy, which reached number number one in the UK.