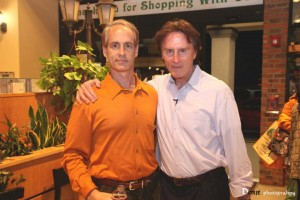 At A Matter of Health in Nanuet,  I had the pleasure to talk about nutrition with Gary Null, a well known contributor to the world of alternative health. He is the author of over 70 books on health and has produced over a hundred documentary films on health, self-empowerment and environmentalism.

He is the host of The Gary Null Show, a nationally syndicated health radio talk show which airs daily on Progressive Radio Network. Gary has made many radio and television broadcasts on promoting consumer activism, nutrition and environmentalism. He has appeared in over 20 television specials on national Public Broadcasting Stations. Additionally, his investigative material on health issues have been used on both 20/20 and 60 Minutes. He has been an activist in the anti-GMO movement, and his 2012 documentary film Seeds of Death: Unveiling the Lies of GMOs, has helped fight the additional introduction of foods produced with GMOs into our supermarkets.  I share with Gary Null the same desire to constantly expand my knowledge of alternative health with ongoing research into this growing field. Gary Null is also an advocate for hypnosis and hypnotherapy and covers these subjects in his book “Encyclopedia of Natural Healing.”