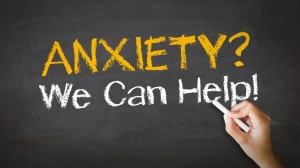 What Causes Anxiety?
Even when there are obvious symptoms, the causes of anxiety may remain hidden and unknown. The anxiety condition remains because the cause of the fear remains and the causes of these conditions remain unresolved.

Anxiety disorders generally result from psychological conditions, but sometimes physical factors and hereditary can play a role too. Discovering the cause of the fear and communicating it to the person is an important step that can lead to diminishing its power to create anxiety in the persons mind. Once it is discovered suggestions can be made that aid the individual to begin dealing with it more rationally.

Almost 1 in 10 people in America have an anxiety disorder. Often the condition is chronic and irrationally based. Left untreated, they can become more intense and even more disruptive to a person’s life. There are four basic types of anxiety disorders.

Generalized Anxiety Disorder (GAD):
3 to 4% of Americans suffer from GAD. They are filled with constant worry, and experience an elevated level of tension which is not in keeping with the actual conditions in their life. They have trouble sleeping, and have difficulty relaxing. They can be suddenly startled very easily. They have trouble concentrating and often feel tired. GAD can begin as early as childhood; and symptoms can sometimes begin to diminish with age.

Panic Disorder:
3 to 6 million people in America suffer from panic disorders, with approximately two thirds of them being women. Although it can begin at any age, it usually first begins when people are young adults. While many develop a full-blown panic disorder, some can experience one single attack and never have another. Most panic disorders include agoraphobia. Agoraphobia is a fear of open spaces, but the underlying fear is of panic attacks. Because of the number of people who have agoraphobia it is sometimes considered a separate anxiety disorder.

Obsessive-Compulsive Disorder:
About 2% of the general population suffers from an Obsessive-Compulsive Disorder. Of these cases, about one third begins in childhood. People with OCD are obsessed with uncontrollable, often anxious thoughts and/or compulsions manifested in repeated ritual behaviors. A person is considered to have a serious OCD if their compulsive behaviors take so much time and cause such distress that they interfere with their daily life.

Post-Traumatic Stress Disorder:
Post-Traumatic Stress Disorder is precipitated by a terrifying event, which results in the person having persistent very frightening thoughts and memories. Though research has recently shown that women may be more prone to PTSD than men, any one who experiences an extremely traumatic event in their life may be subject to PTSD. In fact, it is estimated that up to 4% of Americans will experience PTSD sometime in their lives. Even though symptoms typically appear within three months of the traumatic event, they can suddenly appear years after the event.

Typical Steps in the Development of an Anxiety Disorder:

The Hypnosis Way to Successfully Reduce Your Anxiety

Once the causes of the anxiety are found, often through age regression, desensitization can be employed to undermine the power of the thing causing the anxiety. Exposure to the fear-generating event through hypnosis will result in both the subconscious mind and the conscious mind being able to deal with it without undue paralyzing anxiety reactions. Through hypnosis people are able to uncover and then face past traumatic experiences and end any negative effects coming from them, so that they can then lead a full, normal life.

You should know that no matter how many years you have suffered with undue anxiety or even with panic attacks, hypnosis will still be able to help you.

The Advantages of Hypnosis for Anxiety

Please call our Rockland hypnosis center and book a hypnotherapy for anxiety session at our New City hypnosis center so you can end your current anxiety and lead a more comfortable and relaxed life.